Well it was meant to be an easy day, with just an simple 2.5 hr hike. It wasn’t.

It started well with a transfer to Serce Limani a ﻿very nice anchorage.

Then I chartered a boat, at great expense (150 TL) to take me round to Loryma. Very nice trip 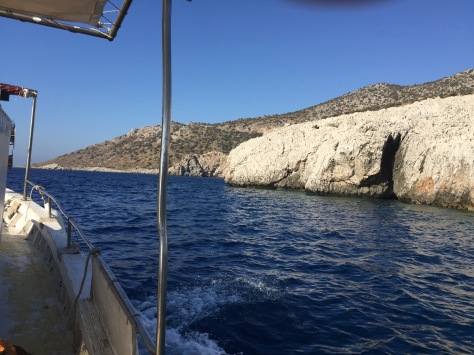 Clam seas, view over to Rhodes, last visited some 50 years ago!, eventually coming in under Loryma Castle.

It’s enormous, this picture doesn’t do it justice. After jumping ship I walked up to it and along its ramparts 3m thick and stretching 320 m.

Well  worth a visit next year. The views are pretty good too.

Then the nightmare began. A supposedly 2.5hr hike turned into a 4 hr sweat.

Almost immediately from leaving the casks I lost the trail. I had come to a large red “x” usually the “wrong way” sign. I spent a while exploring alternatives before returning to said x and deciding it had to be the way, it was. But I soon lost it again. A half hour hike to the end of the bay turned into a hour. There was a nice restaurant and boat dock at the end of the bay so I stopped there. Initially it was just to cool down, did I mention it was hot again today, officially 31, but it seemed higher amount the rocks and out of what little breeze there was. As it was only 12 I said what the heck and gave myself an hour to have a couple of iced teas and some mezes and generally unwind.

While I was there a large charter yacht disgorged a nice group of Americans from Southern California. We soon got to chatting. They were coming to the end of a four week charter. Very nice. They had a elder and more frail looking lady with them who was very chirpy. She said she would write me into the next story she wrote, that I was a very Hemingway character!!! I told her not to romanize what I was doing. They asked if I was blogging my trip so I gave them the site. I look forward to her comments on my Hemingway style writing.

Anyway shortly before 1pm I said my goodbyes and strode off in best Hemingway style up the hill behind the restaurant. 10 minutes later, on losing the trail again I reached in vain for my phone. I simulatianiously heard faint whistles from below me. Putting two and two together I realized I must have left it behind at the restaurant. I made my way rapidly back to collect it. Apparently they had been hollering for a while. So much for trying to make a good impression .

The rest of the hike was hot and annoying, I kept losing the trail, too many animal tracks crossing at all angles, and missing some major changes in direction. Much bushwacking/rock hopping was done to recover the trail. To add insult I must have hot a wrong button on the GPS app as it stopped working until I gave it some serious attention.

On the other a hand I did see a badger. Just. Momentarily. About 30 mitres off.

3 hours later I descended to the Serci Limani and promptly stripped to my shorts and jumped in the sea, and the had a gin and tonic while waiting for my transfer back to the pension.

Another dip in the pool and then a lounge in the evening sun.

Then dress and down to the sea front for some lamb, the first meat for a week, and the usual gorgeous sunset.