Woke to another windy morning. Bus out of town didn’t leave until 11 so I had plenty of time to pack. The bus started at my end of town but while I was allowed to load my bag in it, city regs forbade it carrying passengers, so I had a final walk up the main drag to the far end of town.

Bus ride was uneventful, arriving in El Calafate around 2. Again the bus station is on the outskirts of town. No taxis so a 15 minute walk down the hill into town.

My new hostel seems ok, much smaller than Rancho Grande, except I was designated a lower bunk, and it had very little head room.

A quiet afternoon then dinner and an early bed.

Woken by my alarm at 6.30, a quick light breakfast before my pick up at 7.15 and then, after touring the town picking up other tourists, off for a full day boat tour of the local glaciers. The boat was a nice large catamaran. 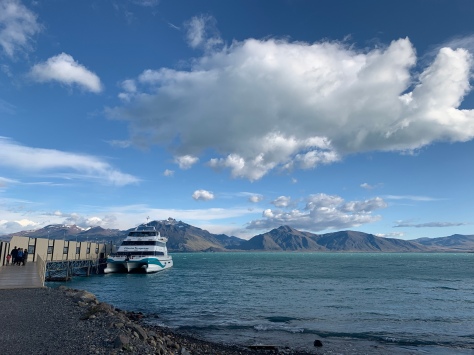 Set sail at 9.00. Our bus was one of the last to the boat, so prime seats taken. After being expelled from the premium area score a seat right up front. However, while it had been bright and sunny when we left El Calafate as we approached the glaciers it started to rain, so taking pictures through the windows did not work.

After visiting a couple of glaciers we went ashore for a short walk. Surprised to see fushias 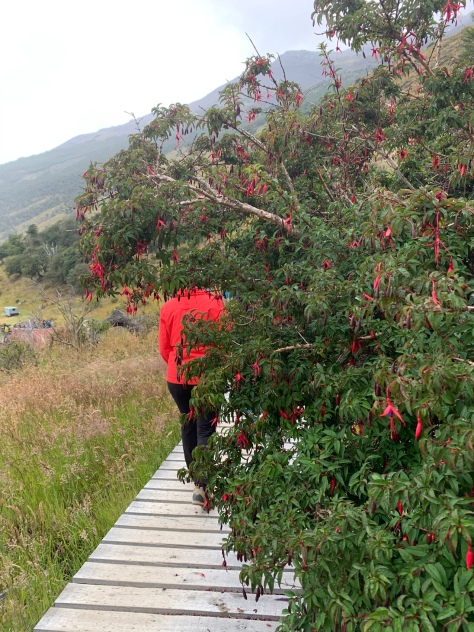 but apparently they are native here. Also it seems that cattle are feral in this park, over 20000 of them. They are starting to cull them as attempts to domestic them and ship them out have proved uneconomic.

We were not allowed to approach the largest glacier, Upsala, as it is unstable, but we spent time amongst it very blue offspring.

Then we had lunch while in transit to glacier Moreno. Pretty nice. 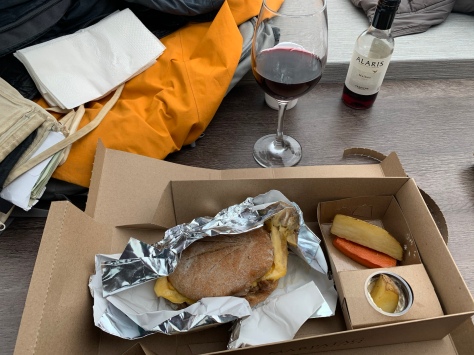 Still raining when we got to the glacier, but still an impressive sight. No calving happened while we were there. Pity. One of the crew fished some iceberg on board so pictures were taken posing with it.

Then back to town, leaving the mountains and rain behind, but not the wind.

Got back to the hostel just after 6.

Beer, then down to town, all of 200m, for dinner. Another good one, 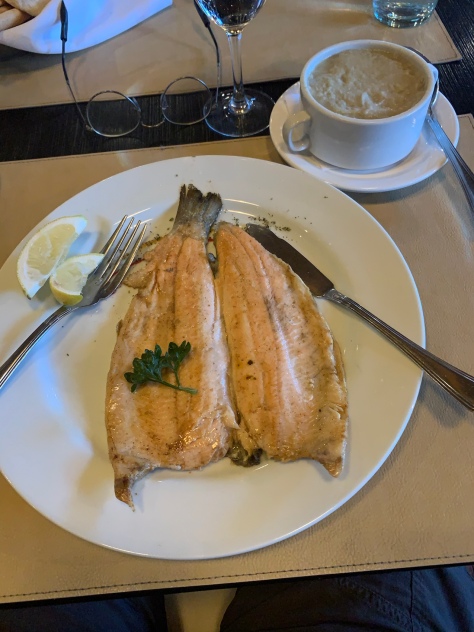 though I made a mistake in my table choice. Half way thru my meal a singer started up just behind me, and then a couple of gaucho dancers started stomping around.

Up early 6.30 for 7.00 taxi to bus station. Funny, last bus I was on I had the best seat on the bus, shotgun, this time I had the worst, right at the back against the engine, and with a coughing lass beside me.

Off we went thru the open countryside

halting only for crossing sheep

and for customs at the Chilean boarder. 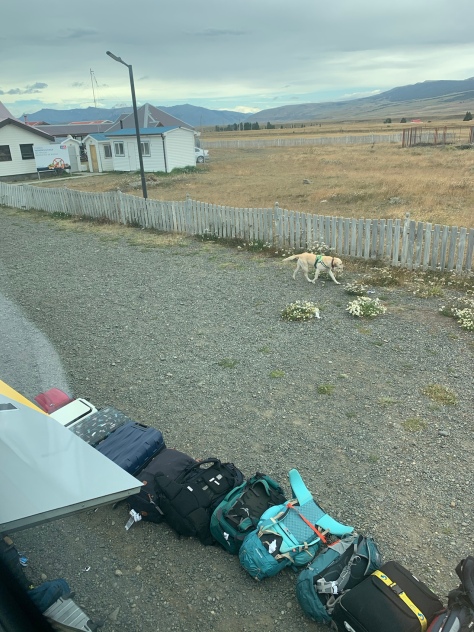 This took forever as first the customs dog had to sniff all our bags, then we all had to go thru passport control, but they only had one person on duty. Took about 2 hours. It was a big bus. 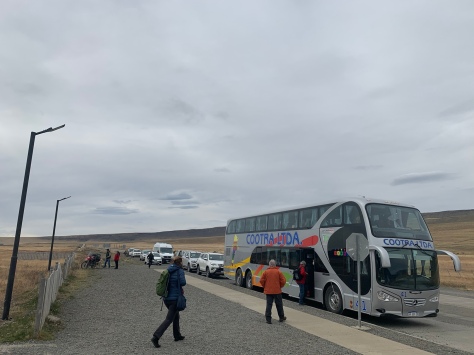 Then on into Chile. Noticeably more animals, sheep, cows and horses. And the countryside got hillier and the mountains closer. 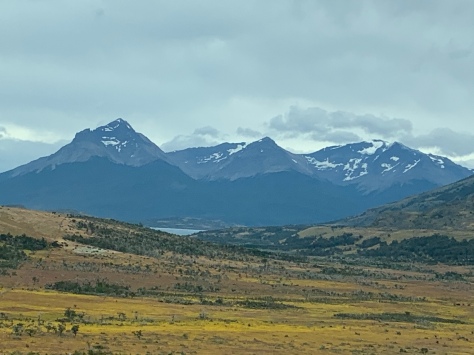 Arrived in Puerto Natales about 2. Walked down into town and found my hostel. Then went for my briefing and to pick up my vouchers. Briefer says I have hit a window of good weather. Also the advertised 12 hour day should only take 8. That’s good.

Funny frontier feel to the place but even busier than El Calafate with far more of everything.

Had a nice pot of tea and a piece of cake and then repaired back to the hostel to sort my gear out for the morrow.

Then out to dinner at #3 restaurant in town, according to Tripadvisor. Very nice but G and T using local gin is not an experiment to repeat.

Plus my palate must be going, I could not detect any lemon in the foam. 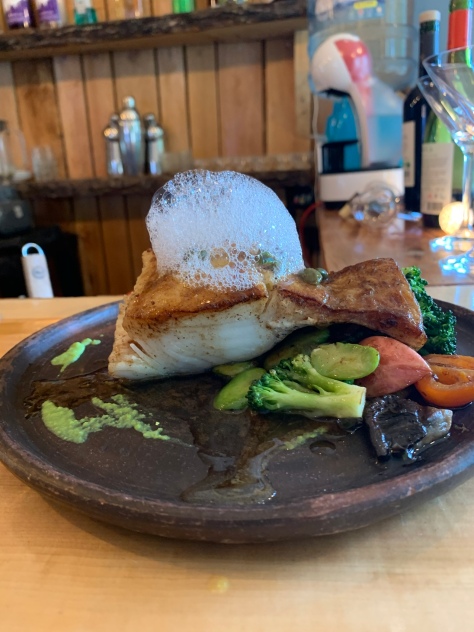 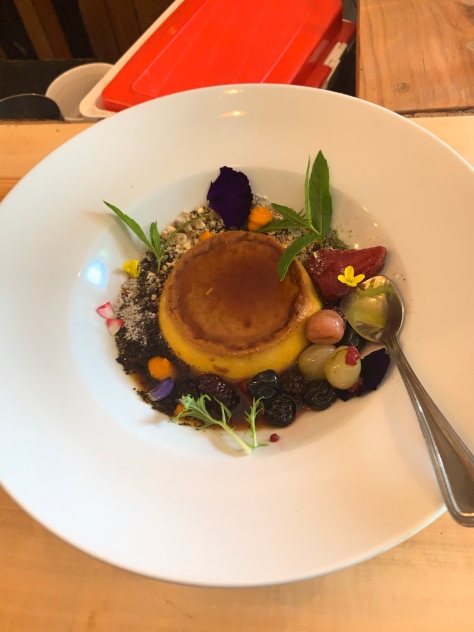 Back to hostel, shower, lots of hot water and more than enough room to swing a cat for a change.

Ok that’s it. I am likely to be out of touch for the next 8 days, though I am told that one can buy Wifi service at each of the camp sites. Who knows, if the price is right ……