Woke at 1 to find someone in the bunk above me where no one was when I went to sleep. Apparently they arrived a midnight having hiked the 34 k from the trailhead stating at midday. Apparently the met a moose on the trail who would not move so they had to go round it.

The cloud base was very low as we had breakfast but as we got ready to leave it started looking better. Temperature around 5 C. We left at our usual leasurely 9.30. Fortunately we stopped at the bridge to take pictures because our hostess started waving at us, Colin had left one of his bags of bits behind.

It was the best mornings walk yet. No rain, little wind, generally easy underfoot, and up a very nice wide valley with mountains on both sides whose tops were lost in the clouds. 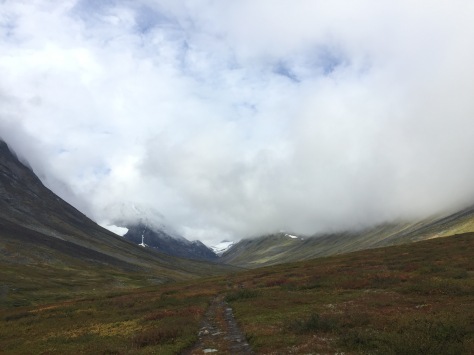 We had one interesting river crossing. I got one wet foot, but didn’t care as they were both wet already. Here is Colin’s passage.

Two young women walking with there dogs passed us going the other direction. Other than those two we saw no others on the trail. We had lunch sheltering behind a boulder and the continued up the valley. 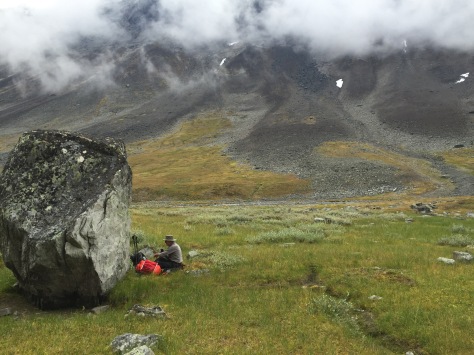 The hut here is superbly situated where two valleys met, close to a waterfall.

We got here in good time. We are here with just one other person.

In the afternoon it continued to clear and sun occasionally broke through but the wind also came up so I did not sit outside.